In 2015, Joanna's story, Upshots, was announced the winner of the London Short Story Prize. It was after we saw this announcement that myself, Lindsay and Carol, all thought Joanna would be perfect as the judge for the Greenacre Writers/FLF short story competition. There followed a hilarious searching of google maps to find out where she lived, and if it was near, enough, to Finchley. Google maps told me Joanna’s home town was near Woking, so not too far then. The reality was somewhat further, much further away! Anyway lucky for us, Joanna agreed to travel to Finchley, with a little bit of help from her husband.

The delightful and friendly Joanna Campbell, was our judge for the FLF & Greenacre Writers short story competition.

You can read the winning stories here.

Joanna started off by announcing the first, second and third prizes for the competition. James Woolf who won second prize attended the festival and read his short story, The Wondwossi Hotel.

She also gave a presentation about her writing career, her experiences of living in Germany, which sowed the seeds for her novel and her thoughts about the power of the short story.

'Nothing can be empty of meaning or irrelevant in a short story. It may not always need a plot, but it must have a point.'

Joanna discussed a variety of research methods, which included purchasing communist chocolate bars (all in the interests of thorough research of course), and the stretching of the imagination beyond the usual limits of knowledge and experience. When talking about character she said:

'Often the characters have little to gain, but everything to lose. Any topic, any revelation, any shock or shedding of skin, is fair game for a short story. It’s a raw, intense moment, so make the reader gasp, panic, laugh, weep.'

She cleverly likened the short story to fish: 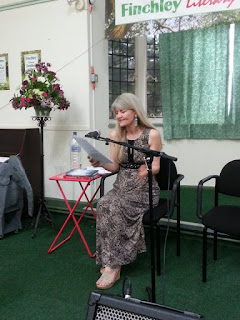 'Where a novel is a shoal on a mission, the short story is a single fish, close to the surface of the sea. Its appearance is fleeting, a bright flash before it vanishes into deep water. But for that moment, its delicate scales, its streamlined shape, are clearly defined. It doesn’t make waves and it passes in silence, but we have no doubt we have seen it.'

There were some wonderful references to famous writers including:

She spoke about editing:

By the time you have written a story—honed it, then added a word, deleted it, then put it back in (twenty times over), polished the thing, put it away, taken it out, printed it, read it aloud, paced the room declaring it the worst bilge ever to grace a perfectly good piece of paper—you have strayed a long, long way from your own self. And you have done this not to escape from life, but to make it more fathomable, more bearable. You have created other, imperfect people who struggle from minute to minute.

And the whole thing:

'You have made a world detached from you, a world which stands alone, able to exist in isolation. And therefore, although you have made fiction, you have also made truth.'

Joanna spoke about how shyness meant she would lock herself away, perfect for writers to get on with the important stuff of writing but not always so good for the writer. It was good to be reminded that characters must be allowed to take the lead:

'Too much confidence can be risky for writers. You must allow yourself to get things wrong. You make progress by recognising mistakes. Your characters should be allowed to take you by surprise and yell, ‘you’re barking up the wrong tree here’.'

And continuing to talk about writing confidence said:

'Perhaps writers possess a different kind of confidence. Not the outward kind, but something entrenched inside, borne perhaps from experience, from childhood, from suffering. The East German novelist, Christa Wolf, talked of how “a deep pain or a deep concentration lights up the landscape within.”' 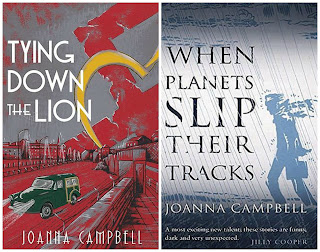 Tying Down the Lion, Joanna's debut novel, is published by Brick Lane and was long-listed for The Guardian's Not the Booker prize 2015. When Planets Slip Their Tracks, published by Ink Tears, is Joanna's collection of prize-winning stories.
Her prizewinning stories have been published in many magazines, Mslexia, The Lampeter Review and The New Writer. She has been shortlisted many times for the Bridport Prize, the Fish Prize and the Flannery O'Connor Award. In 2013 she came second in the William Trevor/Elizabeth Bowen International Short Story Competition and won the local prize in the Bath Short Story Award. She has been published in many anthologies, has a novel published and a short story collection which we will hear more about later. It was our great honour to welcome Joanna Campbell and give her our thanks for being our judge and such an excellent speaker. We shan't forget this lovely day.

Posted by Rosie Longstocking at 04:54 4 comments:

A Memorable event - Harry Parker talks about Anatomy of a Soldier

Last Friday, the day of the Finchley Literary Festival, I awoke to a text from my daughter to tell me that the UK had voted to leave the EU. I thought she was joking. I couldn't really take it in as I'd overslept and had to rush up to Finchley High Road, to collect cheques for the short story competition winners. I'm only now beginning to understand the awful consequences of that vote. But on the day, I had no time to think as we had a festival to run.

Having collected the cheques, I ran home, grabbed cat food on the way, and suddenly heard somebody call my name. It was Carol Sampson, on her way to mine. I jumped in the car and was home in two minutes. No sooner had we arrived, than there was a knock on the door, and it was Lindsay Bamfield. We set off and picked up Mr Greenacres, on our way to the library for the FLF second event. We had to get out of the car, empty it of its contents so Mr Greenacres, could re-pack his equipment. Many moons ago, he used to play in a band so is very good at packing and stacking stuff in other people's cars or vans.

At Church End Library, we were greeted by the new library manager, Richard. And soon our first author for the second event arrived, Harry Parker, to talk to Carol about his novel Anatomy of a Soldier.

To find out more about the first event and the lit fest from Lindsay's perspective, see here.

Harry spoke about the inspiration for the novel, his own experiences in the army in Afghanistan and Iraq. 'Nothing good comes out of war. I came back to a country that looked after me and that gave me hope.' [Our wonderful NHS always deserve a plug]

Anatomy of a Soldier tells the story of Capt Tom Barnes and his near death encounter with a landmine. The story is told from the viewpoints of 45 objects – helmet, bicycle, dog tags, rifle round, rug, medical instruments, handbag, medal, snowflake, drone – before, during and after the explosion.

While writing the book, he was thinking about chapters being blown up in the air and falling in any order, mimicking the disorientation that a soldier goes through. Part of the disorientation for Harry meant working out what each object was. Soldiers can often feel a bit like an object so he tried to make the objects solve problems - joining the army is all about solving problems. Harry loved the way the objects could move in a different way to humans. Move through a country and could even rot and die. His first reading was from the perspective of an infection:

I was inside your leg, deep among flesh that was torn and churned. I lived there for a week and wanted to take root, but it wasn't easy. Some of my spores were washed away with the dirt from your wounds, others were cut out with necrotic tissue, and some were destroyed by a barrage of your white blood cells.
I struggled to survive.

After recovering, learning how to walk again, and returning to work, he had a desk job filling in spreadsheets, but all the while he was thinking about the book that was a'growing in his imagination. Eventually, he quit his job and the army. When soldiers leave, they are offered some sort of course to help them on their way. Harry asked if he could do a writing course. He was told they had never been asked for that before but they agreed. Harry went to Arvon. When he came back he wrote the Anatomy of a Soldier in twelve weeks, though it was a few years before it was published.

In writing Anatomy of a Soldier, Harry says, ‘I set myself rules. The objects don’t have emotion, they can’t speak. There were rules along the lines of, they can only know what someone is thinking if they are touching them. The rules don’t really matter for the reader but they mattered for me as a writer to keep a structure.’

Before the book was published, he shared the script with his father, who is a General, he gave his approval and told Harry to go ahead and put it out into the world.

Harry was asked by a member of the audience whether the accident had made him a writer.

Harry said: 'I would have still been in the army and feel lucky to be here,' and he supposed, yes it had contributed to him becoming a writer. However, his background is as a creative, he was an artist, and recently completed a postgraduate course in fine art. So one must presume his army experience would have found its way onto the page in some form or other.

When he was in hospital recovering from the explosion, he was told, when you're better you'll treasure every day. Harry didn't believe the person who told him that at the time. And at that very moment, Harry's baby daughter, Sophie, who was in the audience, started gurgling. It was very apt, because of course his beautiful daughter is all about hope and the future.

Harry Parker grew up in Wiltshire. He was educated at Falmouth College of Art and University College London. He joined the British Army when he was 23 and served in Iraq in 2007 and Afghanistan in 2009 as a Captain. He is now a writer and artist and lives in London with his wife and daughter.

Anatomy of a Soldier is published by: Faber and Faber