Diary of a Festival Organiser - Day 5

My sister and niece arrived last night so I had guests as well as trying to finish last minute instructions for The Walking Writer. My niece is fifteen and does not do the 'W' word. So my sister and I left her in lazing in bed and in good time to meet the walkers at West Finchley station.

A lot of people asked about the weather, when I had checked it said that rain was expected at 3.00pm, one of the walkers said it was 1.00pm. We set off in hope at 11.30am. 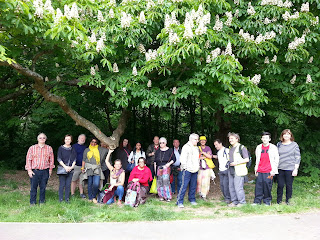 Our first stop was a field where there used to be an old house, Brent Lodge. Built in 1810 it later became the home of Francis A. Hamilton. Despite opposition from Spike Milligan and the Finchley Society, the house was demolished in 1971.
We journeyed on to Dollis Brook and saw the new path recently installed by TFL; the idea is that cyclists and walkers can both use it. Unfortunately it has caused a bit of upset amongst walkers.

Then we did our first writing exercise which just involved closing eyes and listening to all the sounds. One chap couldn't close his eyes as he said he'd fall over. We then continued the journey in silence until we ended up at the lake for a lovely reading, The Lake by Roger McGough, actually it wasn't so lovely...
Down on the lake, piggy eyes glisten.
They have acquired a taste for flesh.
They are licking their lips. Listen .. .

We had lots of readings and creative writing exercises as well as detours into hollows and wooded paths. We stopped for refreshments at Finchley Golf Club and had delicious sandwiches and drinks. Apparently the original owner had a thing for beavers. There are stone beavers outside and wooden ones inside, possibly having escaped from Narnia only to be captured by the beaver-loving golfer!

After lunch and a few Haiku's we continued on our merry way towards Whetstone but only after a few more detours. I began to be a bit worried that I wouldn't make the next event in time so phoned Lindsay to say I might be late.

We visited Brookdene wooded area that is under threat from developers (though not if we can help it). Mr Greenacres who has charted every green space in Finchley takes his role as Green Spaces Champion very seriously. He read an excerpt from Wind in the Willows (see below) and read poems where Spike Milligans house used to stand. The highlight was the finish! Tea and delicious home-made cake at Redwood Cafe in Swan Lane Open space just as the rain arrived.

`I beg your pardon,' said the Mole, pulling himself together with an effort. `You must think me very rude; but all this is so new to me. So--this--is--a--River!'
`THE River,' corrected the Rat.
`And you really live by the river? What a jolly life!'
`By it and with it and on it and in it,' said the Rat. `It's brother and sister to me, and aunts, and company, and food and drink, and (naturally) washing. It's my world, and I don't want any other...'
For the final event of the day and indeed the 2015 Finchley Literary Festival, I'll hand you over to Lindsay, who has written an excellent account of an excellent event and awesome finale which you see here.
Posted by Rosie Longstocking at 15:27