The second book that saved my life.

The trouble is I can't remember what the second book was! I do remember a television programme. So what I'd like to do is include different media under the heading of bibliotherapy...yes I realise 'biblio' is book. But what about film therapy? Or television therapy? Or music therapy? Or art therapy? Art, theatre, music, dance, cinema, books, they all have a story to tell and can be therapeutic. Cinema therapy can be a powerful catalyst for healing - it allows us to use the effect of imagery, plot,and music, in films on our psyche for insight, inspiration, emotional release or relief and natural change. How much better do we all feel after watching a weepie film, yeh right heaps better!

So I will go back in time to when television first appeared in our living room.

I was still five and living with my mother, wicked stepfather, and brother. We had a big ol' tv set with a special box on the back that had a slot for coins, I think it was a shilling back then (5p in todays money). Oh the disappointment when the money expired and the TV switched itself off.

My favourite programme was Twizzle. 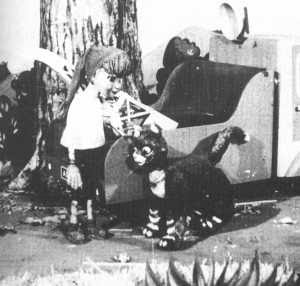 Although Twizzle was described as a 'living boy doll', to me he was a she. Twizzle had the ability to extend her arms and legs to amazing lengths. She lived in a toyshop with her other toy friends where, priced at two-shillings-and-sixpence, she was a little too expensive for most peoples pockets. She had already resigned herself to living on the shop counter forever when, one day, a horrible little girl called Sally Cross came into the shop and bullied the shop owner into selling her for just two-shillings. Horrified that she will have to go and live with Sally Cross, Twizzle hides in the Jack-In-The-Box until nightfall when she escapes the shop by using her 'twizzling' ability. She takes refuge in a dog kennel where she meets Footso, a big black cat whose paws are so enormous that she keeps falling over them.

Footso has also run away from home, and so the two become firm friends before setting off on a series of adventures. One of these involves Twizzle using her unique abilities to rescue a little girl doll from a house fire. As a reward, Twizzle is given a shiny new racing car, but after crashing it she exchanges it with The Garage Man for a red breakdown truck and sets about rescuing broken toys such as Chawky -the white faced golliwog, Jiffy -The Broomstick Man, Bouncy -a ball that has lost its bounce, Candy Floss -the mama doll that can't say 'mama', The China Doll, Thin Teddy Bear, Jack-In-The-Box and Polly Moppet. Needing somewhere to live Twizzle and her new found friends build a town of log cabins which they name Stray Town where all the stray toys in the world are welcome. From time-to-time they are visited by The Toy Inspector, a sort of patriarchal figure who ensures that the toys are alright.

So while the drama of the wicked stepfather and neglectful mother was acted out, I too was able to run away, leave the unsafe world of the living room and join the rest of the rejected toys where we lived in peace forever after or at for half an hour when the programme was on.

Strike up the band:

When I live my dream, I'll take you with me
Riding on a golden horse
We'll live within my castle, with people there to serve you
Happy at the sound of your voice

Baby, I'll slay a dragon for you
Or banish wicked giants from the land
But you will find, that nothing in my dream can hurt you
We will only love each other as forever
When I live my dream

Books That Saved My Life

When I was five years old I used to walk to my local library. It was 1963 and it wasn't so strange then for young children to walk the streets. I used to sit on the wooden floor of the library and flick through the sparsly worded adventures of a little boy in Africa who faced the wrath of a tiger.

His mother made him a beautiful little red coat, and a pair of beautiful little blue trousers and his father bought him a green umbrella and a lovely pair of purple shoes with crimson soles and crimson linings.

On the inside cover is a picture of Little Black Sambo crying. I don't remember ever crying in those days but somehow I knew those tears were mine. Of course if published nowadays, the title, Little Black Sambo would cause a huge outcry, it did in fact have a controversial history.


The original illustrations by Helen Bannerman showed a caricatured Southern Indian or Tamil child. Bannerman wrote the story for her two daughters in 1898 when they were sent away to a hill station to escape the worst of the heat while their parents remained in Madras. Sadly it's thought, the story may have contributed to the use of the word "sambo" as a racial slur. The book's success led to many pirated, inexpensive, widely available versions that incorporated popular stereotypes of "black" peoples. In 1932 Langston Hughes, poet, social activist, novelist, and playwright confronted racial stereotypes, and criticised Little Black Sambo as a typical "pickaninny" storybook which was hurtful to black children, and gradually the book disappeared from lists of recommended stories for children. The book was banned in Japan as late as 1988. 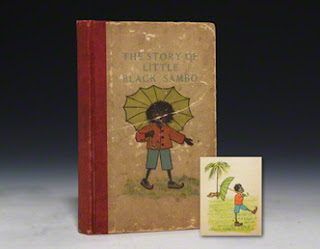 However to me the book was my saviour. I didn't understand what cruel connotations Sambo had or that this little boy had a different colour skin to me, I would learn those lessons later in life. In 1963, Little Black Sambo was my hero, he faced the tigers who wanted to eat him and used cunning to outwit them. This was one of the first books that saved my life!
Posted by Rosie at 15:41 No comments: