On Tuesday 2nd June, I and three other readers attended the Baileys Women’s Prize for Fiction readings at Queen Elizabeth Hall, the Southbank Centre.

The first thing I noticed was the amount of people, it was packed. Was it always like that? Had the Baileys become more popular as reading it seemed had become 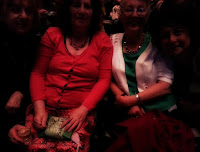 something to rave and get so excited about. Have you read this or this or even that? Meanwhile people were chatting and hugging and checking their phones and then the announcement. 'If you have a mobile phone, please turn it off and no photos.'


The lights dimmed, the Baileys was about to begin. 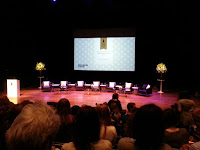 Kate Mosse arrived, there to begin and introduce the presenter, the introducer of the shortlisted authors.

The Baileys Prize, was of course originally the Orange Prize for fiction. The first Orange Prize for Fiction was won by Helen Dunmore for A Spell of Winter. The prize was established to recognise the literary achievement of female writers. The inspiration for the Baileys Prize was the Booker Prize of 1991, when none of the six shortlisted books was by a woman, despite some 60% of novels published that year being by female authors.

In 2014, the Baileys launched #ThisBook campaign. A definitive list of books chosen for their biggest impact on women. See the list here. Despite being the main buyers and readers of books, despite of Books about women don’t win awards. Most Booker winners are men who write stories about men. So, many readers still think a prize for women’s literature is necessary. Read more here.

I’ll be honest, I knew about the Baileys Prize and I listened out for the shortlist over the years when it was the Orange, but I didn’t really take much notice until this year *blushes*. I’m not sure why that is. Possibly because I want to know more about what is happening in the literary and publishing in general.

Back to Tuesday, and I saw the shortlisted authors appear on stage (If you’re interested in the longlist, you can see it here. Except Anne Tyler couldn’t make it and so Stanley Tucci took her place. And though he read well, I thought a man an odd choice at what was supposed to be a celebration of women’s writing and read by women authors. 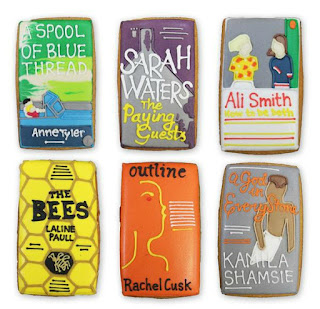 Yes, they are biscuits. Don't they look yummy. Designed by Biscuiteers who are passionate about biscuits and books.
I’m not going to talk about the books, Baileys Judges and others have done that already and you can find out what they said here.
Besides I’ve only read one of the shortlisted books The Paying Guests by Sarah Water as part of the Greenacre Writers Book Club, we were chosen to be one of the one of the book groups shadowing the Baileys Prize. You can see our reviews by clicking on the link above. I was very interested in how I would respond to the author readings.

Rachel Cusk was first with Outline. She gave a rather scathing review of The Paying Guests and I wondered how she felt on the stage. Next up was The Bees which grabbed me immediately. It was so different, unusual and so very powerful. Based on that short extract I would have chosen that book as the winner. To me it represented everything I would imagine the Bailey’s Prize judges were looking for. A strong female voice, well actually more than one, the bee colony is ninety percent female, a female world, experimentation, and inspirational as well as being a debut novel.

Although I would have chosen The Bees, I thought after listening to the readings that it would be our book The Paying Guests that would be the winner. Sarah Waters drew the audience in to the story, it was an easy, exciting and enjoyable read - everything a good book should be.

However, I must accept that the judges knew what they were doing, having actually read all the books! The winner of the 2015 Baileys Women's Prize for Fiction was Ali Smith. *Congratulations* I bought a copy of the book at the Bailey readings but I haven't opened it yet. Apparently there are two versions of the book, one starts with a renaissance artist of the 1460s and the other with the child of a child of the 1960s. It's a surprise to look forward to and be savoured when I do open the first page, begin to read...with Baileys, biscuits and Ali Smith, a wonderful end to a wonderful bookish experience.
Posted by Rosie Longstocking at 17:55 No comments: