How to run a Literary Festival on a shoestring

I recently answered a questionnaire sent to me by The Word Hut for their 'Meet the Writer' section. http://thewordhut.com/meet-the-writer/rosie-canning/ I feel very priviledged to have been asked. They will also showcase one of my short stories, 'Tree Love'. I mention this because one of the questions, asked about the proudest moment to do with my writing and it got me thinking. When I first started the questionnaire I thought it was reading an excerpt of my novel at the Middlesex University Literary Festival. That has since changed and my proudest moment was reading my short story, 'The Swimmer', at our very own Greenacre Writers Mini Literary Festival on the 26th May 2012.

After Lindsay and I had the initial brainstorming meeting, we contacted different writers to invite them to read at the festival. This included Paolo Hewitt, who's autobiography, The Looked After Kid, had moved me to tears. Emily Benet, whose article I had come across while compiling a recent creative writing workshop. We googled local writers in North London and found Lane Ashfeldt. And we invited the lovely, Alex Wheatle MBE, who like Paolo had spent his childhood in care. Lindsay had read Andrew Bradford's interesting biography about his parents and so we invited him as well. Plus we had nine of our own Greenacre Writers including ourselves.

We had very little money, so whatever we did had to be done on a shoestring. I tend to be quite good at designing, so put together a poster and printed copies of this at home to distribute. I also designed a banner, I did this by using publisher, it was very tricky but you can see the results - not bad for a first attempt.

Leading up to the day there were various emails to be sent, the schedule, public transport and car parking details. Then there were the biographies of all the writers to put together - not more than four sentences each (a few more for our guest writers). The hire of the room had been donated as part of the Trinity in May Festival, organised by Chris Herwitz Bremner. (Our thanks to Chris who did a great job organising the whole festival.) We just had to make sure that we had enough chairs. We asked people to pre-book their tickets, which as part of the festival were free. The idea was that people would donate to the Greenacre Bicycle Rally and the Stroke Group - this didn't work as well as we had hoped. And we would advise either passing the bucket round or at least somebody standing at the entrance to encourage donations, if you don't want to charge for tickets.

We arranged that the festival would be in one room and tables for the authors in another, so that they could sign books in the break. This worked really well, as it gave the authors a chance to have a few minutes breather and time for a drink and a snack. We asked the Greenacre Writers to donate food and drink, one member made some tasty strawberry cup cakes that were delicious.

On the day, Lindsay and I arrived a few hours early to decorate the room, set up the chairs, and test the microphone and speaker (this was organised by Mike Gee who is an experienced musician). 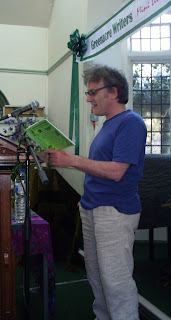 Mike Gee reading his poem 'Death of a Seaside'﻿
Robert Newton, the chairman of our umbrella organisation, Greenacre Project, came very smartly dressed to help with organising furniture and the meeting and greeting of guests and audience. 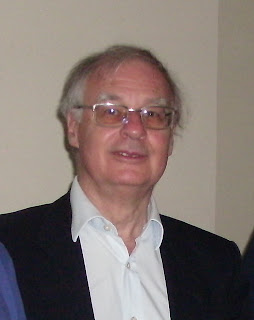 Robert Newton, Chairman of the Greenacre Project﻿
I collected some wild flowers, cow parsley, buttercups and borage - except the cow parsley turned out to be flowering ground elder but it looked very similar. Lindsay bought some flowers as well, and we arranged them in vases.

We managed to create a warm and intimate environment. There were a few other expenses, for example we made sure our guest authors, Paolo Hewitt, Alex Wheatle, Emily Benet, Andrew Bradford and Lane Ashfeldt, had luxury chocolates, wine, and a copy of the Greenacre Writers anthology, as a thank you for supporting the festival. And what support they gave us, professional, engaging, emotive, funny, interesting and inspiring. Many thanks to them, without whom the festival would not have been possible.

We were almost ready when the guests started to arrive! Lindsay and I dashed to the changing room (the ladies changing room) and did a quick makeover. 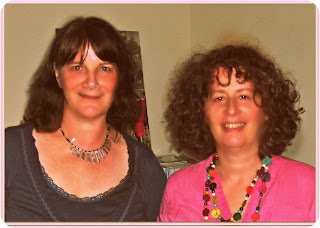 We were ready. Deep breaths, calm. 'Good afternoon Ladies and Gentlemen'.
Posted by Rosie at 03:57 1 comment: