Occupied and Opened - the story of Friern Barnet Library 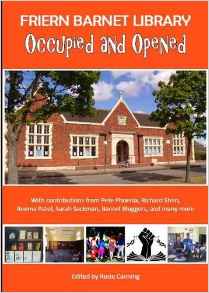 The book features the community voices and community spirit that went into saving the Friern Barnet Library and will be published later in the year.

If it was not Philip Pullman saving libraries in Oxfordshire, it was Alan Bennett saving his library in Kensal Green. Our library and the community campaign stood for something greater, it started to symbolise something beyond what many of us could imagine. It had somehow, demonstrated that power and passion people had for libraries, for reading but also for benefiting from the opportunities afforded a public space, a library, a community home.                            Martin Russo Chair, Save Friern Barnet Library Group 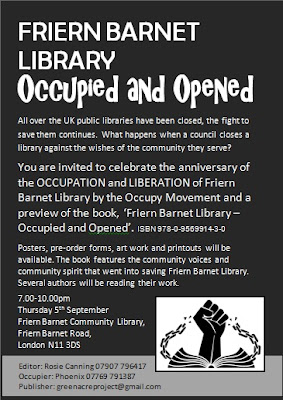 Includes: Introduction by Richard Stein, Leigh Day – top human rights lawyer. An article from Boyd Tonkin, Literary editor at the Independent. There are stories from the Occupiers - Phoenix, Daniel, and Donnie, and local campaigners - Rosie Canning and Mr Greenacres. Barnet Bloggers Roger Tichborne, and Mrs Angry, tell tales about the Council and court case. Save Friern Barnet Library Group members Maureen Ivens, Martin Russo, Frances Briers, Joanna Fryer, and Tamar Andrusier, explain the hard work and heartache behind their campaign. Maryla Persak-Enefer and Helene Alderman describe the passion that went into getting the library building listed. Dorrell Dressekie talks about the history of the building. Mackenzie friend, Reema Patel, talks about her part in organising the campaign and helping the defendants in court. Cllr. Barry Rawlings describes his role as a local councillor. Fiona Brickwood talks honestly about the personal journey she underwent whilst saving the library. Donald Lyven describes his visit to Squatney Wick to see the film, A Polite Revolution and Lucy Nowell gives a picture of life behind the camera. And finally a reflection on community and protest by Sarah Sackman.