This year’s festival began on Friday 17th May with a bit of a shock. Checking through emails I saw one from my co-organiser that said:

‘Woke up about 5.45 with dizziness and headache and threw up - at least I would have if I'd had anything to throw up. Still dizzy.’

It was from Lindsay, who still managed to be funny even though she felt poorly. As I always think the worse, my first thought was she's got that awful Norovirus, my second thought was, quick get the red chalk and mark her door. And my third thought: what am I going to do? Lindsay and I are a team, we’d planned for every eventuality but had not thought what we would do if one of us was ill.

I went through the list in my head of what each one of us was meant to be doing. Then I remembered, Allen Ashley was coordinating the Open Lit Mic, what this meant was that even if we were both ill, the evening could still run without us. Phew! But what about the main event on Saturday?

I zoomed to the printers to pick up the programmes, picked up samosas on my way back. Lindsay was still feeling grotty and was not sure she'd be able to make it. Did last minute list check, phoned Liz Goes, one of the Greenacre Writers, in a panic, could she possibly pick me up.

'No problem,' she said very calmly in that lovely Scottish lilt, 'I'll be there in 3 minutes'.

Still undressed, the bell rang, whoops. Bundled boxes, posters, lists, books into her car and away we flew to the reclaimed and liberated Friern Barnet Library in time for the first event, Miriam Halahmy's workshop.

At 6pm fabulous food for guests and Greenacre Writers arrived courtesy of Chris Freeman, Elaine Kitchenham, Mumpuni Murniati, and others. It was laid out ready for the moment Miriam’s workshop finished. A pale Lindsay also arrived, phew, she had made it.

We had half an hour to eat, prepare the library with posters, tables for books, food and even signs outside so people knew which way to walk through the door. Meanwhile Mike arrived with the mic and did all the clever electrical stuff.

With seconds to spare the Open Mic began. Speech all prepared, I welcomed guests to the second Greenacre Writers Festival before handing over to Allen Ashley, who introduced the wonderful array of guest speakers.

There was an amazing line up of writers, poets, and activists, reading a variety of poetry, short stories, novels and autobiography. These included:

Sometimes pictures speak better than words, so here are a few photos from the evening:


For a detailed account of the festival read Morgen Bailey's blog

For another write up about the festival see Greenacre Writers

Part two about the festival coming soon!
Posted by Rosie at 16:10 No comments:

Greenacre Writers have organised a non-profit writing retreat for Friday 6th-9th September at St Katharine's, Parmoor near Henley on Thames. Full board £145 from Friday teatime-Sunday teatime. There will be no workshops or directed writing, this is a place for you to get on with your writing. Writers may choose to meet in the evening and discuss their writing but this will be decided by individuals at the retreat. 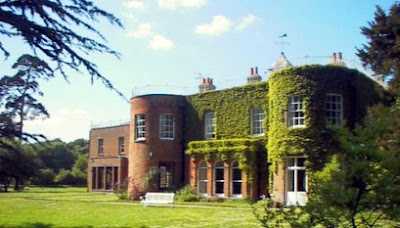 St Katharine's
This historic house stands in 12 acres of grounds in an area of great scenic beauty and abundant wildlife. The rural tranquility of the Chilterns, combined with a peaceful and relaxed atmosphere, make St. Katharine's an ideal destination for a writing retreat.

The house is run by the Sue Ryder Prayer Fellowship, an independent registered charity whose aim is to provide a facility that is ecumenical and non-denominational. The house is open to people of all faiths or of none.

When the house was given to Lady Ryder of Warsaw by the nuns of the Anglican order of St. Katharine of Alexandria, she determined to make it a ‘powerhouse of prayer', a place where people from all walks of life could come to find peace and renewed energy to face the challenges of life.

Delicious food, catering for all dietary and ethnic requirements, is prepared by our professional catering staff. The panelled dining room seats up to 60 people, but larger numbers can be accommodated in the former banqueting hall. 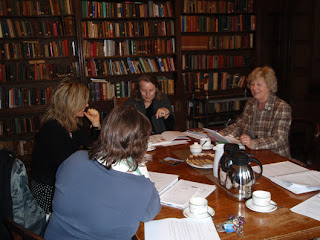 An elegant, sunny room with bay window looking onto the historic cedar tree. Can seat up to 20 in comfortable sofas and easy chairs.
GREEN SITTING ROOM
Another comfortable room overlooking the garden, seating up to 15 in easy chairs and sofas.
LIBRARY
A panelled and book lined room seating up to 8 at a large table.
INNER LIBRARY
A similar sized, book lined room, with views of the garden and seating at a central table plus sofa and easy chairs.

Visitors are free to stroll around the grounds, or find a quiet corner to write and enjoy the peaceful atmosphere. There are a number of interesting features, including a walled garden, a pond, a formal garden which is in process of being renovated and a former sunken garden, which awaits restoration. You can also visit the chickens, who provide the delicious free-range eggs which are used in the House kitchen, and are also on sale to visitors.

Make your stay even more relaxing by booking a treatment. Debbie Lawrence, a Holistic Therapist who has a clinic in Marlow, can be booked for therapy sessions at St. Katharine’s.  These include Aromatherapy, Indian Head Massage, Full Body Massage, Hopi Ear Candling and Reiki Healing.  For more information click here

If you would like to book your place, contact Rosie Canning: greenacrewriters@gmail.com
Posted by Rosie at 03:31 No comments: