A strange woman is standing on Hope’s main street. ‘Hope’ presumably an optimistic place, but Sara isn’t staying there, only passing through to the aptly named Broken Wheel.

Her hair was a nondescript shade of brown, held back with a carelessly placed hair clip which didn’t stop it flowing down over her shoulders in a tangle of curls. Where her face should have been, there was a copy of Louisa May Alcott’s An Old Fashioned Girl.

The literary allusion to Alcott’s Girl, sees the protagonist, Polly, leave the country to visit her wealthy city friend, Fanny. Sara has left Sweden to visit the USA. There are parallels between the two - though Broken Wheel, is not much more than ‘one big street’ rather than a city. And although initially Polly is rejected by the Fanny’s friends, Sara, is pretty much accepted straightaway. 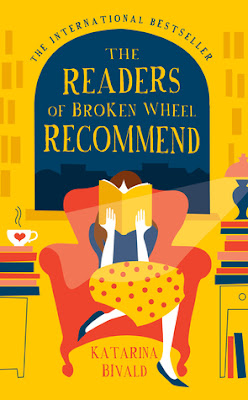 This is a book about books and clues, clues that are littered throughout the text as the narrator and the town decide how Sara’s literary life will pan out.

Sara is 28, and has never been outside Sweden – except in the (many) books she reads. When her elderly penfriend Amy invites her to come and visit her in Broken Wheel, Iowa, Sara decides it’s time. But when she arrives, there’s a twist waiting for her – Amy has died. Finding herself utterly alone in a dead woman’s house in the middle of nowhere was not the holiday Sara had in mind.

As Sara reflects on how she has used books to hide away from life, she remembers how classmates carved meaningless symbols into desks or on lockers, while:

...she had been a geisha in Japan, walked alongside China’s last empress through the claustrophobic, closed-off rooms of the Forbidden City, grown up with Anne and the others in Green Gables, gone through her fair share of murder, and loved and lost over and over again.

Reading books isn't a bad way to live your life, but lately Sara had begun to wonder what kind of life it was, exactly. She had first been struck by this thought when she found out that Josephssons would be closing. It was as though ten years of her life had disappeared along with the bookshop; as though everything she had ever been had only existed on the greyish-white bookshelves of that dusty shop, among the people who bought four-for-three paperbacks in the summer, and anything-at-all-that-was-shiny-and-wrapped-up at Christmas.

Amy accompanies Sara’s narrative journey so the reader gets to see how their relationship evolved. Here in this town so broken it’s almost beyond repair are all the people she’s come to know through Amy’s letters: poor George, fierce Grace, buttoned-up Caroline and Amy’s guarded nephew Tom.

Sara finds herself staying in Amy’s house rent free, a situation she finds intolerable. She tries to find somebody to pay, but nobody wants her money. Money is symbolic, because more than anything, this is a story about community, about being needed and about belonging and that can't be bought.

Sara quickly realises that Broken Wheel is in desperate need of some adventure, a dose of self-help and perhaps a little romance, too.

There was something sad about the town, as though generations of problems and disappointments had rubbed off onto its bricks and its roads…On the other side of the road there was an advert for a pesticide: Control corn root worm! it shouted to the world, two by three metres in size and at least twenty years old.

In short, this was a town in need of a bookshop. And just as there is a romantic interest in Alcott’s Girl, namely Tom, so there is a Tom in Broken Wheel. ’It is a truth universally acknowledged that a Swedish tourist in Iowa must be in want of a man.’ No prizes for guessing the influence of that sentence.

Sara remembers a colleague from the bookshop where she worked in Sweden saying that every story begins with someone arriving somewhere – and this too refers to what this story is, and what it will become. And so as the story weaves its spell, twists, plots and allusions to literary twists, spells and plots, the narrative sometimes acts like a play, complete with stage directions. The townfolk plot and whisper prompts from the sidewings, directing and deciding which shape the story will take.

Caroline closed her eyes. The innocent tone wasn’t fooling her. My goodness, she thought. The woman had barely been in town two days and Jen had already started offering up its young men to her altar. Though, to be fair, it might just as well have been the woman being sacrificed. Like the oaks, the town’s bachelors weren’t exactly a tourist attraction…[Jen’s] gaze was fixed somewhere above Caroline’s head. ‘Don’t you think a holiday romance would be just the thing to get her to enjoy her time here?’

The text is littered with foreshadowing and allusions as to how stories work, particularly romance. The Readers of Broken Wheel Recommend is a book about books. All sorts of books, from Little Women and Harry Potter to Jodi Picoult and Jane Austen, from Stieg Larsson to Joyce Carol Oates to Proust. It’s about the joy and pleasure of books, about learning from and escaping into them, and possibly even hiding behind them. It’s about whether or not books are better than real life. For book lovers, this metanarrative is a joy. One that has been expertly handled, for here is a narrator, who like Sara, has spent a huge amount of time with books.

Sara feels she never belonged anywhere – save between the pages of a book – but as she becomes more involved in the town and is embraced by the residents of this far-from-perfect small town, she discovers they need her as much as she needs them.

The Readers of Broken Wheel is a lovely book, and like The Guernsey Literary and Potato Peel Pie Society, a joy to read. It is a book that would benefit from more than one reading in order appreciate the complex narrative and literary intertwining. After such an interesting debut book, I wonder if Katarine Bivald's second book will live up to expectations. I hope so, and look forward to her new novel some time in the future.
Posted by Rosie Longstocking at 15:54 2 comments: