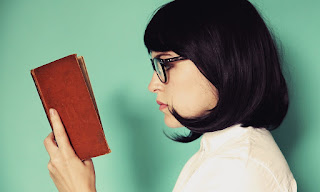 The Not the Booker Prize

In an effort to “get people talking about books, to promote previously unknown authors and to reward some quality books,” The Guardian called upon its readers to nominate their own choices for their favorite books of the year, stating in a July 29, 2009 article: “The judges of Britain’s most prestigious literary award pick the wrong book far too often. But who could be trusted to make a better choice? Why, the readers...of course.” Voila! The Not the Booker Prize was born. A sort of literary referendum by the reading public for the reading public.

I was very pleased to see Tasha Kavanagh's book Things We Have in Common (Canongate) on the Not the Booker list as I had heard Tasha reading an excerpt at the Finchley Literary Festival and found myself intrigued.

Things We Have in Common is a creepy tale of loneliness and teenage obsession, described by its publisher as “Sue Townsend meets Zoë Heller”, with overtones of Emma Donoghue’s Room.


From the first sentence, I found myself sucked into a story that had me on edge. The narrative shifts between creepy, poignant and darkly humourous were overwhelming at times.

'I typed How to spot a paedophile into Google on my laptop. About a billion sites came up. I took a quiz on one. It showed pictures of people (men mostly) and you had to click Yes for paedophile or No for not a paedophile. I only got half of them right, which technically means there was a 50 per cent chance I was wrong about you.'

Kavanagh has captured the voice of the teenage outsider, the misfit, one who is overweight and living with a stepfather whom she dislikes whilst all the time missing her father who died the year before. She is ostracised and bullied by fellow classmates who are really cruel, the thing that gets her through is a massive crush on a fellow pupil, the pretty and popular Alice. With the help of her imagination, she makes up situations that cast her as a heroine and a much-wanted object of love.

Kavanagh writes the novel entirely from Yasmin's point of view in second person. Yasmin speaks to a man with a dog, who she calls `You' and whom she suspects wants to abduct the lovely Alice. Yasmin's story is essentially very sad but also disturbing, at times the reader is unsure of her reliability as she is prone to lying and being very secretive.

As a detective reader, I suspected how the novel was going to end but I was hugely surprised which is a good thing.

Yasmin’s young voice is so spot on, brilliantly realistic, whilst still being naive, optimistic and extremely fragile. The book is so well written that I felt at times I was prying into a young girls diary. It is a clever book and will keep the reader glued and guessing until the last page.

Things we have in Common made the Not the Booker shortlist:


and now it's time for the Not the Booker Prize final judgment. Vote here

Posted by Rosie Longstocking at 11:24 No comments:

Back in January, I joined Eva Stalker's #TBR20 which meant wandering around my flat looking for 20 unread books. The idea being that I would read these before buying anymore. Eva completed her task and here is her final update. You can find out more about the original project here.

I haven't completed the task and I am not going to post excuses. At night I began dreaming about #TBR20 and the unread books. The task was supposed to have had the opposite affect and relieve the guilt of books that hadn't been read. To date I have read half the #TBR20 pile. Plus due to a few festivals and author events I now have another pile of #TBR books. You'll have to excuse me for a moment while I have a quick hunt and take a photograph. 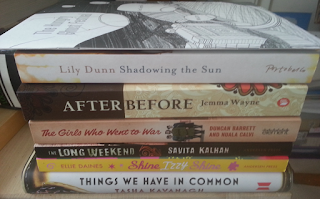 Here they are! Now be honest, if you had attended the 17 events at this year's Finchley Literary Festival, would you have come away empty handed? Not only was I attending, I was organising too. I had to buy books, it would have been rude not to! One book, pinched by my Sci-Fi boyfriend is missing: The Ship by Antonia Honeywell who gave a fabulous talk. I've read this and thoroughly enjoyed getting to know the rebellious Lalla. And in case you can't read the title of the book on top of the pile, that's The Hungry Ghost Festival (2012), a collection of poetry by Jen Campbell about her childhood and adolescence in the North East. 'Kitchen' and 'Lobster Girl' are my favourites.
And there's more...almost immediately after the festival, Greenacre Writers Book Club got involved with this year's Baileys Women's Prize for Fiction which meant reading one of the shortlisted books, The Paying Guests by Sarah Waters and reviewing the book. 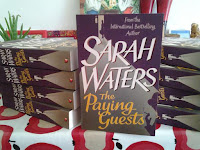 Myself and Meral Mehment were then nominated to attend the shortlisted readings at the Royal Festival Hall which was great fun. After listening to the six readings, I wanted Sarah's book to win, but felt sure that How to be Both by the outstanding Ali Smith, would be the winner. Whilst listening to her reading, I was reminded of James Joyces' stream of consciousness style in Dubliners (1914). The judges must have had a very difficult task as nearly all the books were captivating and I especially enjoyed an excerpt from The Bees, a debut novel by Laline Paull. And of course, I bought more books. 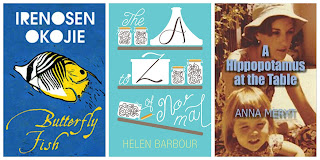 And then three writers, one of whom, gave a reading at the festival, decided to publish debut books in the same week. I had heard an excerpt from Irenosen Okojie's novel, Butterfly Fish at FLF and I found myself intrigued and fearful for the characters almost immediately. Greenacre Writers Helen Barbour and Anna Meryt also published books. I attended Helen's launch, The A-Z of Normal at The Phoenix Cinema. She gave a very interesting talk about her path to publishing which included all sorts of visual aids. Anna Meryt, came along to the Greenacre Writers Meet-up and brought a few copies of her book A Hippopotamus at the Table. Unfortunately, others beat me to them, so A Hippo is definitely on my To-Be-Bought (TBB) list. I hope to do this at her forthcoming book launch to be held at The Big Green Bookshop September 11th, 7pm. Just waiting for Irenosen's next reading to get my copy signed too.

As well as festivals and debut books, I've also been attending some writing events: The Tinder Press line up with Maggie O'Farrell Instructions for a Heatwave, Sarah Winman A Year of Marvellous Ways, and Sarah Leipciger The Mountain Can Wait, where yes, I bought even more books.

A couple of weeks later, last week in fact, I attended another event at Foyles, Charing Cross, to hear Matt Haig and Cathy Rentzenbrink discussing Cathy's The Last Act of Love. Cathy had the audience in tears with her friendly welcome especially for the broken people. I was particularly pleased to meet Cathy as she is the Project Director of book industry charity Quick Reads. I always choose Quicks Reads for my World Book Night choice. Did I buy books?

Well, I'm starting a PhD in September and living in a fictional world is one of the core themes, so I'm beginning to collect books that have reading as part of their narrative and in particular books that help to save people lives. Cathy and Matt write about how reading and writing helped them deal with personal tragedy and illness and continuing to live.

And then I heard about Katarina Bivald's The Readers of Broken Wheel Recommend, just the title had me intrigued. And although at it's core it is about belonging, it is also about a love of books. I can't wait to read it!

It seems I have shifted from not buying books to buying even more. Whether that is a problem, well, I'll have to wait and see... if they get read.

Posted by Rosie Longstocking at 11:18 2 comments: