The Paying Guests by Sarah Waters

It is 1922, and London is tense. Ex-servicemen are disillusioned, the out-of-work and the hungry are demanding change. And in South London, in a genteel Camberwell villa, a large silent house now bereft of brothers, husband and even servants, life is about to be transformed, as impoverished widow Mrs Wray and her spinster daughter, Frances, are obliged to take in lodgers.

The Barbers had said they would arrive by three. It was like waiting to begin a journey, Frances thought. She and her mother had spent the morning watching the clock, unable to relax. At half past two she had gone wistfully over the rooms for what she'd supposed was the final time; after that there had been a nerving-up, giving way to a steady deflation, and now, at almost five, here she was again, listening to the echo of her own footsteps, feeling no sort of fondness for the sparsely furnished spaces, impatient simply for the couple to arrive, move in, get it over with. 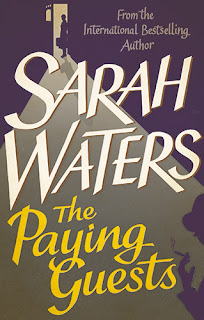 Waters evokes perfectly the atmosphere of losing a private space in a home. With the arrival of Lilian and Leonard Barber, a modern young couple of the 'clerk class', the routines of the house will be shaken up in unexpected ways.

Then she realised that Lilian was not moving away; she was simply looking out into the passage to be sure that no one else was near. Now, in fact, she was turning back, she was drawing breath, she was stepping forward-pushing off from the doorpost as if gently but bravely launching herself into a stretch of chill water.
And with no more effort than that, no more fuss, no more surprise, she came across the room to Frances and touched her lips to hers.

As passions mount and frustration gathers, no one can foresee just how far-reaching, and how devastating, the disturbances will be.

Greenacre Writers was selected as one of the 12 book clubs who were shadowing the Baileys Women's Prize for Fiction 2015. We were given The Paying Guests by Sarah Waters was well as a lovely bottle of Baileys and some bookmarks.

This was the first Sarah Waters novel that I've read. I enjoyed being taken back in time and had no problem with the intensity of the relationship. I found the descriptions of paying guests arriving and living in the house and all that brings with it, like the loss of privacy very lifelike. It is almost as if Waters takes the traditional Lady and Servant roles and turns them up-side down. Lillian is the more bohemian, Frances scrubs floors without shame.

I didn't enjoy the suspense of the murder trial, though I enjoyed the plot (if that makes sense). I did feel the author rather let the reader down by the ending, I really wanted to know what would have happened had the outcome been different. This could possibly have been a book for which there were two endings.
Posted by Rosie Longstocking at 12:48