Half of a Yellow Sun by Chimamanda Ngozi Adichie

I remember seeing starving Biafran children and babies with protruding stomachs on the television in the early 70s. I was living in a children’s home in Muswell Hill and two friends had come round for tea. We were chatting about the disco the coming Friday and practising the shuffle to Sex Machine by James Brown. Life was fun and we spent most of our time together bent over double, laughing hysterically. But when the horrific aftermath of war suddenly came into the living room I was shocked, first into silence, and then into floods of tears.

Recently, that memory came back when I began reading Half a Yellow Sun by Chimamanda Ngozi Adichie. I now have a context to that memory, the history of the Biafran war. Through the medium of television, I saw children much worse off than myself. Possibly for the first time, and I never forgot those children, or the ravages of war and what guns do to innocent victims. 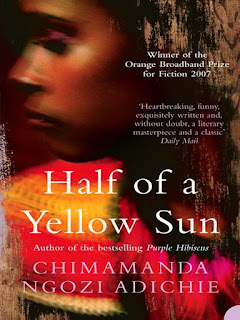 The novel recreates a seminal moment in modern African history: Biafra’s impassioned struggle to establish an independent republic in Nigeria, and the chilling violence that followed. Everything that happens within Half of a Yellow Sun has a cause, and often someone to blame along with it, with the British and the Hausa earning their fair shares. The reader is reminded that Britain and Russia supplied arms to the Nigerians. Adichie goes back in time through the remembered experience of her parents and family and those that didn’t survive. Beginning with the dedication:

My grandfathers, whom I never knew, Nwoye David Adichie and AroNweke Felix Odigwe, did not survive the war. My grandmothers, Nwabuodu Regina Odigwe and Nwamgbafor Agnes Adichie, remarkable women both, did. This book is dedicated to their memories: ka fa nodu na ndokwa. And to Mellitus, wherever he may be.

Mellitus, was Adichi’s parents’ houseboy during the war. She brings Mellitus back to life and tells his story, giving his memory a voice. Half of a Yellow Sun, is Adichie’s second novel and received the 2007 Orange Prize for Fiction. It takes its title from the flag for Biafra.

Red was the blood of the sibling massacred in the North, back was for mourning them, green was for the prosperity Biafra would have, and, finally, the half of a yellow sun stood for the glorious future.

The novel opens before the war, shortly after Nigeria wins independence from the UK, when middle-class life at Nsukka University is rich in food, booze, revolutionary rhetoric and hope. Ugwu, an Igbo boy from a bush village, goes to Nsukka to work as a houseboy for Odenigbo, a professor and radical.

Master was a little crazy; he had spent too many years reading books overseas, talked to himself in his office, did not always return greets, and had too much hair. Ugwu’s aunty said this in low voice as they walked on the path. ‘But he is a good man,’ she added. ‘And as long as you work well, you will eat well. You will even eat meat every day.’ She stopped to spit; the saliva left her mouth with a sucking sound and landed on the grass.

The narrative focus shifts between various characters attached to the university: Ugwu, Odenigbo, his beautiful girlfriend Olanna, and Richard, an English ex-pat who falls in love with Nigerian art and then Olanna's twin sister.

‘Nigerian food is quite all right, Harrison,’ Richard said. If only Harrison knew how much he had disliked the food of his childhood, the sharp-tasting kippers full of bones, the porridge with the appalling thick skin on top like a waterproof lining, the overcooked roast beef with fat around the edges drenched in gravy.

Food at the beginning of the book represents the affluence of their lifestyles, there is plenty of it, an abundance. As the circumstances change, so too does the food.

Nsukka University is evacuated, and Olanna, Odenigbo, Ugwu, and Baby move to the cities of Abba and then Umuahia. Their living situations get progressively worse as the war continues and Biafra’s food and money runs out.

Olanna glanced at the clutter that was their room and home – the bed, two yam tubers, and the mattress that leanded against the dirt-smeared wall, the cartons and bags piled in a corner, the kerosene stove that she took to the kitchen only when it was needed – and felt a surge of revulsion, the urge to run and run and run until she was far away from it all.

Food is symbolic of the progress of the war and the situation of the country. As distribution of food ceases and people start to starve, disease follows. Olanna meticulously searches Babie’s head for red hair and compares other children’s bellies to her daughter’s in search for signs of Kwashiorkor, malnutrition caused by lack of protein.

Were you silent when we died?
Did you see photos in sixty-eight
Of children with their hair becoming rust:
Sickly patches nestled on those small heads,
Then falling off, like rotten leaves on dust?

The reader witnesses the role the media played in distributing images of starving children. “The world was silent when we died”, is a book that sometimes interrupts the narrative. It is being written by an unknown author who describes the larger political forces at work in the war.

We are led to believe it is Richard writing the book, mainly because he is trying to write one throughout the novel. Adichie is playing with some reader's assumption that it is the white, western male that writes about Africa, rather than say a young, black village boy. She says: “I wanted to make a strongly-felt political point about who should be writing the stories of Africa.”

Half of a Yellow Sun has recently been named the best of the best winner from the last decade of the women’s prize for fiction both by the public and a 10-strong judging panel. Read more here. 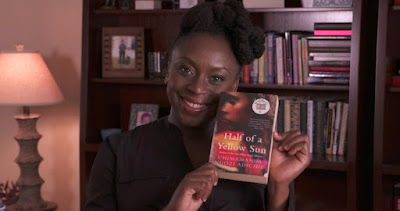 I had put off reading Half a Yellow Sun, for quite some time. There were a number of reasons for this. The main one being the memory of the horror in the living room when I was thirteen. However, I was intrigued by Adichie and her stories and I wanted to read and learn more. The final push came a few weeks ago when a few bloggers and writers started tweeting about #DiverseDecember. You can read more about that here.

I found myself totally immersed in the lives of the characters who immediately came to life in my imagination. I understand how the war started, how those babies on the screen back in 1971 came to be there - even though the war had ended in 1970, their starvation continued for some years.

I'm looking forward to joining other writers and readers for #ReadDiverse2016 where I'll not only be reading BAME books, but also other diverse books and in particular books about care leavers who are totally under-represented in UK literature. The literature of the world should (by now) reflect the people of the world.
Posted by Rosie Longstocking at 12:50

One of my favourite books Rosie.... And a stunning review!

Thank you Lisa. I loved the way this book was written, it deserves all its prizes. Such unforgettable characters.

Your review has made me think I should try again. As for you the Biafran war represents something especially brutal from the past. I have never been able to finish reading it. Caroline (Bookword)

Although,I was not born then to witness the Biafrans' secession from Nigeria but I learnt it in school,I saw it on TVs - the massive killings and how people were rendered homeless and all - but all that was in the past and long forgotten. However, Chimamanda's Half Of A Yellow Sun brings back the forgotten memories of Biafrans' experience. All thanks to Chimamanda's write up which is powerfully delivered.