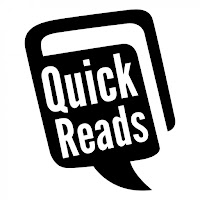 Last night I attended the inspiring Quick Reads 10th Anniversary celebration at Foyles in Charing Cross. I had two reasons for doing this; one, I am a huge fan of the Quick Reads initiative and always choose them as my World Book Night choice. And two, I attended in my role as Senior Library Assistant because I wanted to boost our Quick Reads collection in the medical library where I work.

There was only one problem. At a recent library meeting when I mentioned this was what I intended to do, I was asked why we should have fiction in a medical library. I'll come back to this later.

The evening was chaired by Cathy Rentzenbrink. When Quick Reads was founded in 2006 Cathy Rentzebrink was an assistant manager at Hatchards. “I can remember thinking that short books for less confident readers were a good idea. I can also remember wondering pessimistically how many people in that bracket would manage to get themselves into the corner of the basement of Hatchards and stumble upon the books made and meant for them.” Read more here.

The evening's writers—Fanny Blake, Rowan Coleman, Matt Haig, Elizabeth Buchan and Veronica Henry—took to the stage to read from their short stories collected in The Anniversary, edited by Veronica Henry, to celebrate this landmark year. 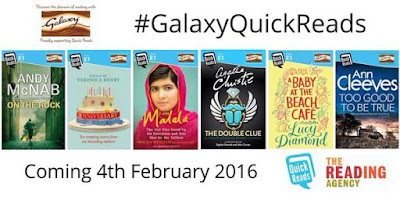 Cathy Rentzenbrink will usually commission a book from a well known author but sometimes if something happens, like illness, the line-up has to be rethought. When this happened last year, Fanny Blake, agreed to step in at the last moment. Blake has written for Quick Reads before: Red for Revenge. Blake said she was shocked after asking for a deadline, and was told two months! She had no time to think about it and in some ways this suited her as she just likes to get on with the writing of it. Though, Blake was given some advice and told, don’t think about the rules, just write it. Go back and change it if you need to. Which is good advice for anyone who has a habit of procrastinating. 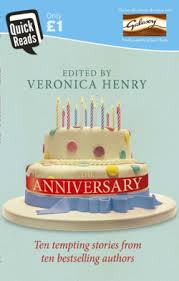 Elizabeth Buchan had an operation last year and was feeling a bit fragile, a bit sad. She found reading QR’s the right level for her mind at that particular time. This was echoed by many people in the audience. Her short story, 'Moment of Glory', included in The Anniversary anthology, left the audience on a cliffhanger.

Rowan Coleman has dyslexia and felt marginalized as a child when she was put into remedial groups or in corners with pens and told to colour-in. A teacher who saw 'that' something in her, encouraged her.
Rowan learnt to become friends with her dyslexia. She used to have a great fear of the density of the text and would miss out massive chunks when reading. She would even mime hymns at school which showed great ingenuity. She finished by saying: 'I began my journey of friendship with dyslexia, and the wardrobe opened to Narnia'

Matt Haig spoke about how before he became depressed, he’d been doing a Masters and reading a huge amount. When he got ill he couldn’t read anything because he couldn’t concentrate. He was living back home with his parents in a small town that didn’t have any bookshops. As a way to escape his own mind and do something that wasn’t bad for his liver, he began reading children’s books, his old favourites. He had little moments of losing himself: 'Books are very therapeutic for you'. In the past Haig had a tendency to think that a good book had to be difficult to understand, all tied up with academia. 'There is a lot of snobbery around books,' he said, 'and we have to watch that. Books are for everyone.'

After the last reading, Cathy Rentzenbrink passed the microphone to the audience. Sitting patiently, I asked the final question of the evening. I explained the fiction in medical libraries conundrum, and asked the panel to give me some ideas to take back to the next library meeting.

Some of the suggestions I had already investigated, such as Books on Prescription, Mind Boosting Books, but I hadn't heard of the Wellcome Book Prize. An annual award, it is open to new works of fiction or nonfiction. To be eligible for entry, a book should have a central theme that engages with some aspect of medicine, health or illness. 'The Wellcome Trust is an independent global charitable foundation dedicated to improving health, because good health makes life better.' And that should be the basis of everything we do in the NHS.

A medical library enables NHS staff to boost the health of its patients and heal them. If we inform staff of the therapeutic and mind boosting qualities of fiction, then they in turn can inform patients. However, just as important in my opinion, is the health of the staff. Without them, patients will not get better. And, as most people are aware, the austerity that is being forced on the NHS is having an effect on the health of staff who are being overworked by the shear number of patients they have to look after. I feel it is my job to support the staff in my hospital, and that is what I intend to do.

Matt Haig said that the line between non fiction and fiction was grey, blurred. 'Non fiction is fiction in waiting.' He also said that when he was ill fiction helped him more than non fiction. Stories are all about change and this helped Haig believe change was possible.

The Reading Agency has just published a report with such gems such as:
- A fifth of the nation has been motivated to take better care of their health by reading a book
- 27% of the population have been inspired to make a positive change in their life from reading such as look for a new job or end a bad relationship)

I'll be using the report in a new exhibition about health and wellbeing, which will be my response as to why we need fiction in a medical library. If all else fails, I'll have to try some bribery with Galaxy® chocolate that I collected at last nights celebration. GALAXY® Chocolate and Charity Quick Reads revealed research showing 30 minutes reading and [eating chocolate] a week can improve lives. Read more here.

The Anniversary: Ten Tempting Stories From Ten Bestselling Authors (edited by Veronica Henry)
The Double Clue: Poirot Short Stories by Agatha Christie (edited by Sophie Hannah and John Curran)
Too Good to be True by Ann Cleeves
A Baby at the Beach Café by Lucy Diamond
On the Rock by Andy McNab
I Am Malala: The Girl Who Stood Up for Education and Was Shot by the Taliban (An Abridged Edition) by Malala Yousafzai with Christina Lamb

QR titles have now been loaned by libraries nearly 4.3 million times, according to new data from Public Lending Right (PLR). The latest figures for public library loans of all Quick Reads titles up to June 2015 show that total loans since the scheme began are now nearly 4.3 million (4,280,157) - an increase from 3.9 million in 2014.

To find out more about Quick Reads, visit their website.

Posted by Rosie Longstocking at 04:50

I have given Quick Reads books to people who have dysphasia after a stroke. They may have been fluent readers but their language impairment or simply reduction of concentration on the written word makes reading hard. Quick Reads are a brilliant way of keeping that love of literature going and has also introduced others to the world of literature.

What a wonderful idea, thank you for sharing. Do let the Quick Reads people know, they have asked for people's feedback and stories.